When Should You Hire an
Attorney for a Traffic Ticket? 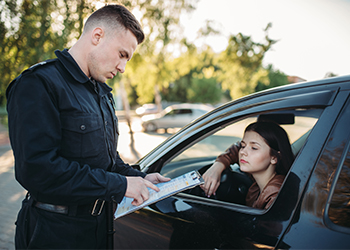 Many drivers who receive a traffic ticket for any type of violation face a tough decision: paying the ticket or hiring an attorney to fight the ticket. While paying the ticket is often the easiest option, the main problem with this option is that you are essentially admitting your guilt and waiving your right to a trial by court.

Once you admit your guilt in Georgia, the state’s ticket system will add points to your driving record. As a result, you may face a suspension of your license or other penalties.

At the Law Office of Jay G. Wall, the experienced criminal defense attorney assists residents of Georgia to fight traffic violations. As a former prosecutor, he provides a superior level of legal representation to clients facing traffic tickets in Woodstock, Georgia, and other parts of the state, including Marietta, Canton, and Cartersville.

A traffic violation occurs when a motorist violates laws that govern and regulate traffic. Traffic violations refer to a number of unlawful activities involving motor vehicles, such as speeding, drunk driving, and failure to stop at a red light, among others.

Every day, thousands of drivers across the United States receive traffic tickets for moving and non-moving violations. In Georgia, all moving violations are considered misdemeanors punishable by up to 12 months in jail and $1,000 fine. Some of the most common types of traffic violations in Georgia include:

Whether you received a traffic ticket for a moving or non-moving violation, you might want to speak with a knowledgeable attorney to discuss the circumstances of your case and determine if you should pay the ticket or fight it.

Most states have a system in place which accumulates points on a driver’s driving record. The system assigns a specific number of points to each type of traffic violation. The more points you accumulate, the harsher the penalties.

In Georgia, the point system assigns points for each driving-related offense, ranging from two to six points. The number of points it takes to have your driving privileges suspended depends on your age and the timeframe of the accumulation:

Georgia’s point system assigns no points to speeding violations unless the driver was driving 15 mph or more over the posted speed limit. In addition, no points will be added to your driving record if you are not a Georgia resident.

No matter what penalties you are facing, you might want to contact a skilled attorney to help you build a strong strategy in order to protect your driving privileges and avoid other penalties.

Hiring an Attorney When
You Receive a Traffic Ticket

While a traffic violation might seem like a minor offense, the potential consequences can become harsher as you accumulate more points. Fortunately, you still have a right to fight the traffic ticket until you pay it. Many people choose to hire an attorney to help them with their tickets and advise them on their options. An attorney can help you with the following:

Common types of defenses to a traffic ticket include:

Using a proper defense strategy could help you avoid fines, possible license suspension, an increase in insurance premiums, and other penalties. An experienced criminal defense attorney can help you fight your traffic ticket and avoid or minimize the penalties associated with a traffic offense.

How the Law Office of Jay G. Wall Can Help

The skilled and results-driven criminal defense attorney at the Law Office of Jay G. Wall is committed to providing his clients with aggressive advocacy for their best interests. He strives to help clients facing traffic tickets to get the ticket dismissed and avoid or mitigate the negative consequences of a traffic conviction. Schedule a case evaluation to discuss your options for fighting a traffic ticket today. He proudly serves clients in Woodstock, Marietta, Canton, and Cartersville, Georgia.